Each year, more than 45,000 Americans are lost to pancreatic cancer—parents, grandparents, siblings, children, friends and other beloved members of our communities. And because pancreatic cancer does not discriminate, it also claims the lives of national figures whose loss is felt not only by their immediate family members and friends but by the entire country and even around the world. Unfortunately, 2020 saw the loss of two such figures to pancreatic cancer: Civil Rights icon and 17-term Georgia Congressman John Lewis on Friday, July 17 and Equal Rights champion and longtime U.S. Supreme Court Justice Ruth Bader Ginsburg on Friday, Sept. 18. 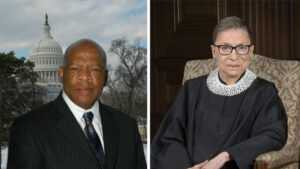 To honor the lives and legacies of two of the most transformative and inspiring public figures of our times, the Lustgarten Foundation has established the Ruth Bader Ginsburg & John Lewis Pancreatic Cancer Research Program. In addition to supporting the Foundation’s mission to cure pancreatic cancer by funding scientific and clinical research, the program will address the ongoing need for greater gender and racial diversity within the pancreatic cancer research community.

The first initiative under the new program is the creation of two three-year, $300,000 Fellowship grants for a total commitment of $600,000:

Pancreatic cancer is diagnosed in men and women at roughly the same rate but affects around 20 percent more Blacks than whites. Through the Ruth Bader Ginsburg & John Lewis Pancreatic Cancer Research Program, the Lustgarten Foundation seeks to help close the gap in the number of early-career women and minorities applying for and receiving funding to study pancreatic cancer and conducting research leading to better understanding and treatment of the disease.

The program will be administered through the American Association for Cancer Research (AACR), which will begin accepting submissions later this fall. Other program offerings may be added in the future.

As a federally-designated 501(c)(3) tax-exempt nonprofit organization, the Lustgarten Foundation is prohibited from engaging in political campaign activity, and the establishment of the Ruth Bader Ginsburg & John Lewis Pancreatic Cancer Research Program should not be interpreted as a political statement.