Scientific research—when seen only from a distance, on television or the news—can appear sterile, antiseptic, formulaic. Goggled workers in white coats wielding pipettes offer us only a tiny glimpse of the creativity it takes to tackle tough challenges like pancreatic cancer. 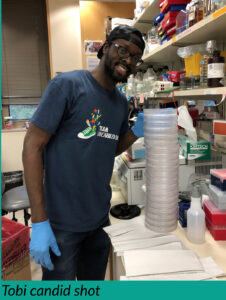 Speak to the young, ambitious, driven researchers working on this disease and you’ll hear inspiring ways they find and nurture the spark they need to tackle such a demanding project. For Tobiloba Oni, working at Cold Spring Harbor Laboratory, in suburban New York, it’s partly the legacy of his father, an orthopedic surgeon, and his brother, an internist—caring for patients runs in the family. “I was initially thinking of medicine, but when I got to grad school I wanted a challenging field. There are a lot of challenging fields, and pancreatic cancer is really challenging! A lot of scientists think of themselves as people trying to solve problems and to come up with creative solutions. With pancreatic cancer you have to be even more creative.”

But being creative as a scientist also means being highly disciplined about which new ideas are worth further testing and which to discard. “You want to find things that are impactful,” he says. “It might be cool. But is it impactful? Do you have the means to do it?” For inspiration, Oni turns to the biologist and writer E.O. Wilson, and his concept of “consilience”, also the title of Wilson’s 1998 book—the idea that science and the humanities have much to teach one another. Oni also reads philosophy, finding smart ideas everywhere to help in his lab work. “I want to bring my creativity to the fore and be able to solve problems by connecting the dots. I make sure I regularly update my scientific diet reading about genetics, biochemistry, bacteria. You never know where the ideas come from, so you have to be receptive.”

Tobi loves “finding connections,” which have led him to a major milestone for every young scientist, as lead author on a recently-published paper, focused on the mechanism of how pancreatic cancer cells function. “After all the rigor, creativity is how you tell the story at the end,” he says. For two award-winning researchers working at Johns Hopkins, in Maryland, Emily Hsuie and Jackie Douglass, both doing a combined MD/PhD program, the lab’s collaborative and supportive work environment is key to their creative flair. “Everyone wants everyone else to win,” says Jackie. “Bert [legendary cancer researcher Bert Vogelstein, MD] has recruited all these talented people, so it’s extremely rewarding,” agrees Emily. While each member of the lab’s 30-member team brings slightly different skills and works on a specific piece of the pancreatic cancer puzzle, “if I have a new technique I need some help with, that other person will have a mature understanding of what it entails,” Emily says.

“I think creativity is a huge component of our success,” says Jackie. “We spend a lot of time in our meetings brainstorming. It’s a very flat hierarchy and our ideas are respected. We’ve been given a lot of leeway.” 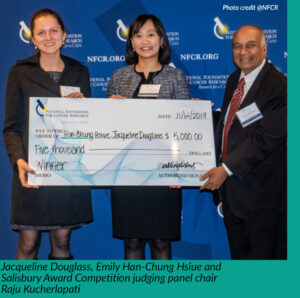 agrees Emily. “One of the advantages of working in a large well-funded lab is we have the privilege of taking a lot of risks, because it’s a really big project.” Smaller labs fighting for annual funding “will take safe steps, but that, of course, limits your creativity,” she adds. Thanks to their lab’s faculty, funding and reputation “we can think of something and try it, no matter how far-fetched it is.”

Examining the known, respected and familiar approaches to this work with fresh eyes, asking new and unlikely questions – the root of all forms of scientific creativity and eventual breakthroughs—can also mean risking one’s credibility and reputation. “Taking risks is essential to our success,” says Emily. If researchers focus more on producing the next paper to publish “it will really limit our scope.”

A highly supportive professional atmosphere, especially for younger researchers like Emily and Jackie, means there’s always room for them to ask tough, unusual questions, they agree. “Bert and the faculty are extremely encouraging,” says Emily. “They always help us look at the bright side and how to take positive steps forward.”

Jackie and Emily’s work uses five specific antibodies to target mutations on the surface of cancer cells, and both have won major awards for their ideas.“They thought it was really groundbreaking, potentially,” says Emily, already trained as a physician. The Lustgarten Foundation has established four dedicated pancreatic cancer research laboratories, including the labs at Cold Spring Harbor Laboratory and Johns Hopkins where Tobiloba, Emily and Jackie are using their creativity to tackle this disease so notoriously difficult to diagnose and treat. Lustgarten’s commitment to funding these facilities ensures more research, time and talent are being put toward pancreatic cancer and a pursuit of a cure. 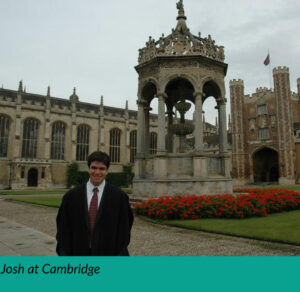 Josh Cohen, who works in the same lab as Jackie and Emily, worked for a year at Cambridge University in England, studying computational biology. Too many people, he says, assume scientists are a “lone wolf doing tedious experiments in the lab. It’s creative! The most exciting element is filling in the different pieces of the puzzle.”

And some of Cohen’s creativity comes from the British tradition of a daily tea break, when he enjoyed casual, friendly chats with his Cambridge colleagues, often leading to shared ideas or new insights. “One of my favorite moments was making chitchat over tea,” he recalls, “versus that subconscious pressure to be racing and productive. It often produced the most profound and enriching conversations with friends, as we’d ask: ‘What are you working on?’”

A global perspective brings fresh thinking to the work that Ana Babic is doing at the Lustgarten Foundation’s dedicated pancreatic cancer research laboratory at Dana-Farber Cancer Institute in Boston. Dr. Babic grew up in a small coastal town in Croatia and finds her European education and background help her think creatively. “We connect things in a different way. For me, creativity has always been a default state of mind. I question and re-question everything.”

Babic also worked in labs in France, where there was “lots of joking and no stupid questions,” another workplace so supportive that new ideas were freely discussed. She is working with tremendous amounts of data from four long, large studies of physicians and nurses whose bloodwork was done regularly for decades to determine when and how the earliest and faintest signs of cellular changes signaling pancreatic cancer begin to appear, often many years before the disease.

Babic is optimistic that her work, like the work of all these talented researchers, will make significant progress in fighting pancreatic cancer. “The research is growing exponentially. We have new therapies. All of a sudden, things are moving!”