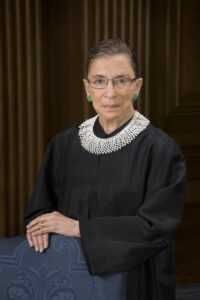 Woodbury, N.Y. Sept. 18, 2020–“Today, the world joins together to mourn the loss of associate justice of the Supreme Court of the United States Ruther Bader Ginsburg and sends condolences to her family and friends,” said Kerri Kaplan, President and CEO of the Lustgarten Foundation. “While we are saddened by this devastating loss, we must uphold the legacy that she left behind both on the bench and as a pancreatic cancer survivor.” Justice Ginsburg’s long-standing career began in 1980 when she was appointed by President Jimmy Carter to the U.S. Court of Appeals for the District of Columbia Circuit, a position she retained until her appointment to the Supreme Court. During her illustrious career, she was an ardent supporter of gender equality and women’s rights and an inspiration to the cancer community as she faced her own cancer diagnoses In 1999, Justice Ginsburg was diagnosed with colon cancer. Determined to remain on the bench during her diagnosis, she underwent surgery followed by chemotherapy and radiation. A decade later, she faced another difficult diagnosis: pancreatic cancer. Fortunately, the disease was caught early, which is often not the case with pancreatic cancer, and Justice Ginsburg was able to continue on with her duties. “In recent years, as her health deteriorated, she was seen as a pillar of strength and perseverance in the cancer community,” Kaplan said. “She will be remembered fondly not only for her imprints on the American judicial system, but as one of the great trailblazers of her time.” As the fourth-oldest Supreme Court Justice, Justice Ginsburg will be remembered as a woman of integrity who fought for gender equality and made significant legal advances for women. In 1954, she earned her B.A. in government at Cornell University and earned her law degree from Columbia Law School in 1959. During her undergraduate years, she met her husband Martin Ginsburg, whom she married shortly after graduation. The couple was married for 56 years before Martin passed away from complications from metastatic cancer. Justice Ginsburg died from metastatic pancreatic cancer. Just as “RBG” was committed to justice, the Lustgarten Foundation is committed to finding earlier detection methods, better, more effective treatment options and, ultimately, a cure for pancreatic cancer. To make a donation in memory of Justice Ginsburg’s life and legacy, visit our website at www.lustgarten.org/donate. 100 percent of every donation will go toward pancreatic cancer research.