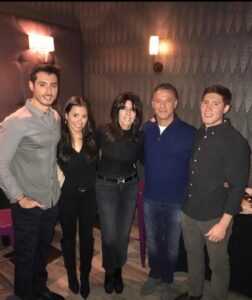 That’s what made closing up shop much more difficult.

Dr. Gotlin battled pancreatitis three years ago and had been diagnosed with a small cyst on his pancreas that doctors monitored closely. Then, at 61 years old, the doctor suffered from increased abdominal pain and knew something wasn’t right. That’s when he decided to get a CT scan. His greatest fear came to fruition in March 2020; a tumor was found on his pancreas.

“My first thoughts were: how can this be?”

This wasn’t part of the plan he laid out.

“My plans were to slow down and retire at around 62,” the born and bred New Yorker said. “[I wanted to] travel, be involved in the community and in philanthropy, and volunteer.”

On most days, Gotlin worked between the hours of 5:30 a.m. and 10 p.m., treating patients ranging from the average New Yorker to the professional athlete.

Now, Gotlin scans his Memorial Sloan Kettering Cancer Center treatment portal to find out when his next chemotherapy cocktail will be. He admits to feeling like a pin cushion, getting poked and prodded with needles. But he knows this is part of the process. Although challenging, Gotlin has come to terms with the disease and is ready for the fight of his life.

“Once I got diagnosed with pancreatitis, I was subconsciously preparing myself for what might be,” Gotlin said, referring to his cancer diagnosis. “But when it finally came to be, it was life-altering.”

He knew the statistics. Pancreatitis is a risk factor for pancreatic cancer, increasing the risk of the disease by two to three times that of the general population. But even that came out of left field. There was no family history of the disease, and his genetic testing didn’t reveal any specific mutation. As an occasional social drinker with an average diet, doctors simply could not pinpoint how this came to be.

Battered but not beaten, Gotlin is approaching this the only way he knows how.

“You have two choices: to either fight it or not,” he said. “Even something as gloomy as pancreatic cancer has come such a long way, and with all the research going on, the hope is this will become a chronic disease. When you wake up every morning, if you want to have a down moment, take it. If you want to cry, cry. Realize there is always hope and optimism.”

As a patient, he knows it is easy to fall into a funk. The normally gung-ho Gotlin faced depression for the first time in his life after he went in for a Whipple procedure, a complicated surgery offering patients the best chance for long-term survival. Following a laparoscopy of his abdomen, doctors noticed his cancer had spread to a couple of lymph nodes—an indication of Stage IV disease.

“It was like a movie,” Gotlin remembered. “I was in the recovery bay and there was a window to the outside. My surgery was scheduled for 2:30 p.m. and I thought I’d be getting out late at night.”

“I opened my eyes and saw sunlight out of the window,” he added. “My immediate response was to quickly look at my stomach. It had the purple markings where the [incision] was going to be, but it wasn’t done. I knew right then—something was wrong.”

They regrouped together as a family after this devastating news. Gotlin is blessed to have the support from remarkable caregivers like his wife of 37 years, Marcia, his sons Matthew and Adam, daughter Samantha, and their loving significant others Briana, Lindsey, and David. Their support helps to keep him alive every day.

“Caretakers do bear the brunt of what’s going on more than the patient sometimes. My family has been so supportive,” he said. “My wife has been absolutely above and beyond as a caretaker. Her whole focus is me. It’s her personal quest. [I give her] all the credit in the world. Without her, there’s no way I would be here today,” he added.

These situations have the tendency of uprooting an entire family, in particular children, which Gotlin says “eats his heart out.” But his kids defy his requests to just live their lives and instead are constantly with him.

With the COVID-19 pandemic still in full throttle, Gotlin is taking the extra time at home to put life into a different perspective. He is doing things he normally never would’ve imagined—cooking with family, painting, and deciphering puzzles. His favorite part—getting ordained to marry his son and new daughter-in-law in a beautiful outdoor ceremony when their wedding plans changed due to the pandemic. Gotlin says it was the first time since his diagnosis where he smiled the entire day.

“It was well worth the time.”

His family keeps him busy and coaches him towards positivity. After coaching his children through the years, the shoe is now on the other foot.

“You have to realize what’s important—your family, close friends, and your health. Period,” he said. “Nothing else matters. Whether you make one dollar a week or one thousand a week, it doesn’t matter. Your family and health are what guides you the rest of your life.”

As for advice from one determined doctor to his fellow fighters, Gotlin left with this:

Gotlin’s goal is to keep on the new chemotherapy regimen as best as he can. He plans to deal with the side effects and hopes his scans show the treatment is shrinking his tumor, so doctors reconsider the Whipple procedure. He looks at the research—including the research the Lustgarten Foundation is supporting—and stays optimistic, because breakthroughs happen all the time. His plan has shifted but make no mistake, this sports doctor doesn’t plan on striking out.