Join “Jeopardy! James” in the Fight

Tune in tonight, Monday, September 9th, as the 36th season of Jeopardy! kicks off. We will be watching and look forward to cheering on the iconic game show host Alex Trebek on as he reprises his role for this upcoming season after his pancreatic cancer diagnosis five months ago and subsequent treatment.

In a recent article, Trebek promised viewers an entertaining season ahead. “We’ve got some exciting things coming up, and I can’t wait to share them with all of you,” said Trebek in the article. “Let me tell you, it’s going to be a good year.”

Even Jeopardy! James, James Holzhauer, who won an impressive 32-straight games on the show, will be tuning in to wish his friend well. Watch the short video he shared ahead of the show’s premiere below.

Trebek’s courageous fight is giving hope to thousands of patients and their families who have been affected by this disease. Join us and Jeopardy! James tonight as Jeopardy! returns.

In honor of Trebek and everyone else impacted by pancreatic cancer, please consider donating $36 for season 36. 100% of your donation goes directly to research leading toward a cure. 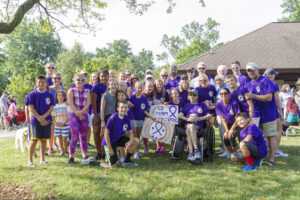 We all watched in disbelief as Alex Trebek shared in March that he was suffering from Stage IV pancreatic cancer. This news hit Naperville, IL Walk leader Ann Zediker especially hard, as she lost her own father to the disease in 2010, just five months after he was diagnosed. She watched a man who loved life deteriorate during treatment. Now, Ann is fighting for continued research and a cure.

This year, Jeopardy! champion James Holzhauer, who won an impressive 32-straight games, caught her attention. After seeing him on the show, she learned that he was born and raised in Naperville, and she invited him to attend this year’s walk on Saturday, July 14th. While he couldn’t attend, he has added his support to the Naperville Walk in honor of Alex Trebek and all the other survivors. His generous donation of $1,109.14 represents his daughter’s birthday (November 9, 2014).

We encourage you to follow James’ example and donate amounts corresponding to your birthday, in honor or in memory of a loved one, or in support of Alex Trebek.

Your contribution will make a difference in detecting the disease earlier, developing better treatments and eventually finding a cure! And, thanks to separate funding to support administrative expenses, 100% of your donation goes directly to pancreatic cancer research.